My 10-year-old grandson is playing M-rated video games and his parents don’t seem to mind–what can I do? 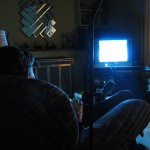 Q: My ten year old grandson is seemingly addicted to his Xbox and is allowed to play M-rated games. On weekend he spends hours on end playing. He becomes very defensive when you call him. His room has become his dungeon and his parents allow it, I guess to keep him out of their hair! Any advice?

Your question highlights a very common issue with raising children in today’s digital domain—namely, that different attitudes and rules about media use can be a source of much tension, not only between “digital native” children and their “digital immigrant” parents, but also between parenting and grand-parenting generations. Rest assured that you are not the first grandparent to disagree with parenting choices made by their children for their grandchildren – and it may not be possible to convince your children that you have a better idea.

Still, there may be way to communicate about this issue that can help. Offer your observations in a way that is loving toward your grandson, respectful to his parents, and as objective as possible, in a way that shows your understanding of the many demands on the parents of a school-age child. Try talking to your grandson’s parents about your concerns for his health and happiness, at times when the outcomes of his gaming behaviors, rather than the gaming itself, are the issue at hand (like when he won’t come out of his room to come to dinner). In a non-judgmental way so they don’t leap to the defensive, ask his parents how they feel about the fact that he’s always in his room playing video games. Listen to their answers – they may be closer to your own than you expect.

Once you have shown them that you respect them as parents, let them know that it worries you , and explain why:

If you feel as though you may be stalling out with trying to explain your concerns to your grandson’s parents, try playing the games with him yourself. Use this as an opportunity to talk with him about what he finds fun about the games he plays. Remember, he will likely be much better at gaming, but it will be nearly two decades before the executive functions of his brain – impulse control, future thinking, and a conscience – will fully develop. He can demonstrate his gaming mastery, and you can demonstrate reflecting on his actions.

You may not see immediate changes, and you may find yourself having conversations repeatedly. But the best thing you can do for your grandson is to have loving, respectful and honest conversations with his parents regarding his media use, and to continue to support their parenting efforts in ways that contribute positively to your grandson’s health and development.

Should apps be part of a library’s story time?
My 15-year-old opened secret social networking accounts, what should I do?